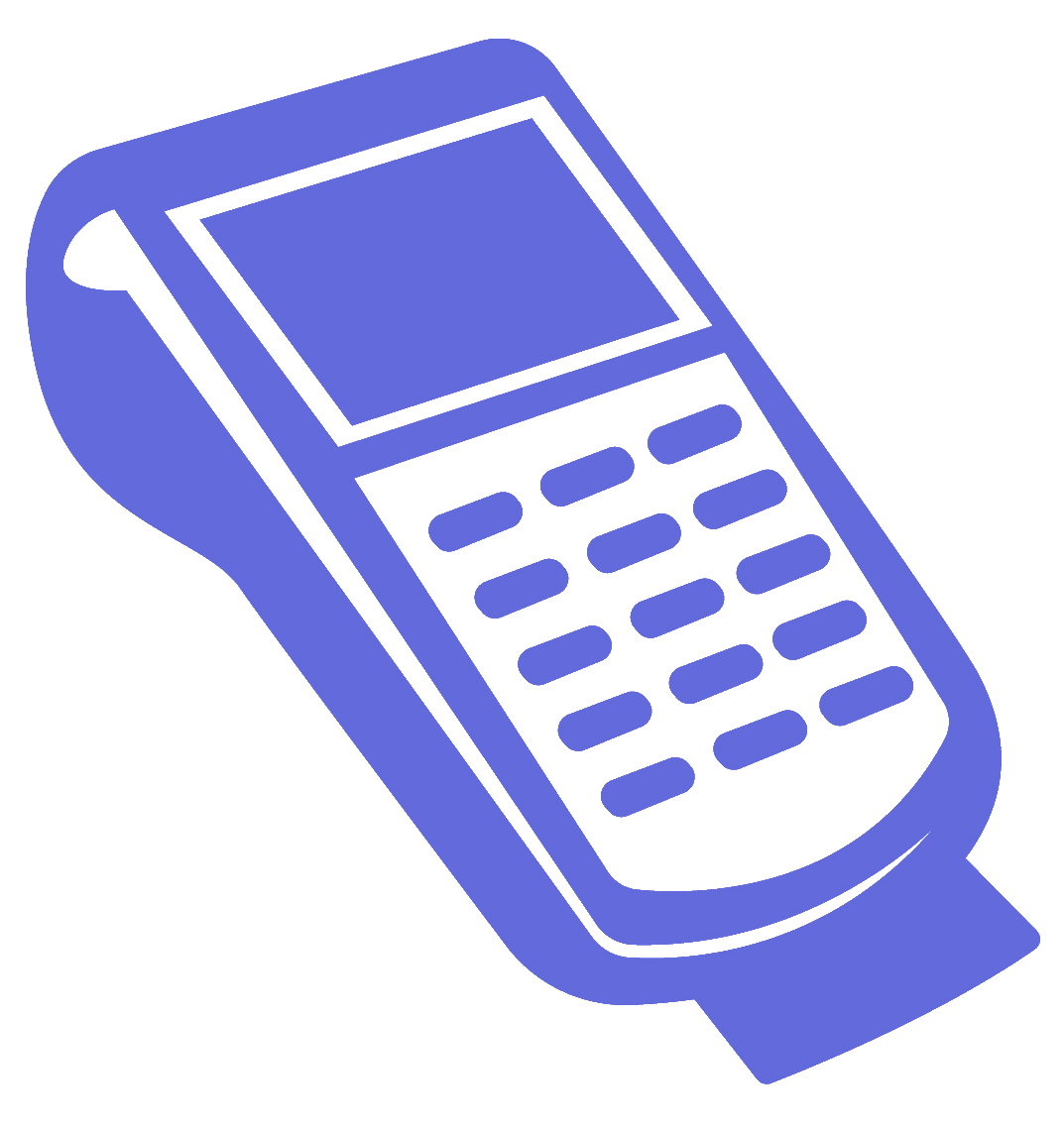 We crunched the data for 9,000 crypto wallets to see exactly how distributed high market cap coins are. 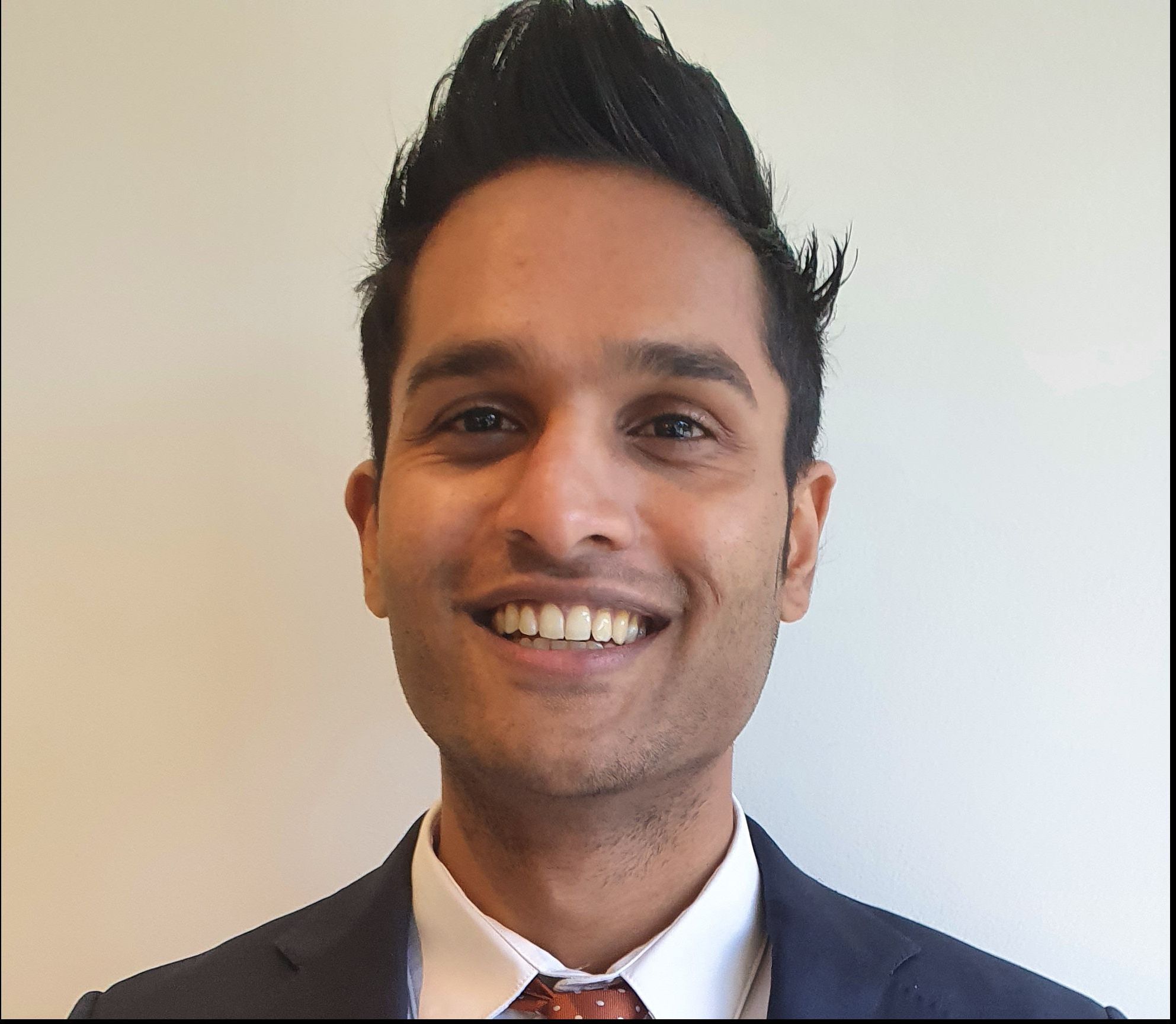 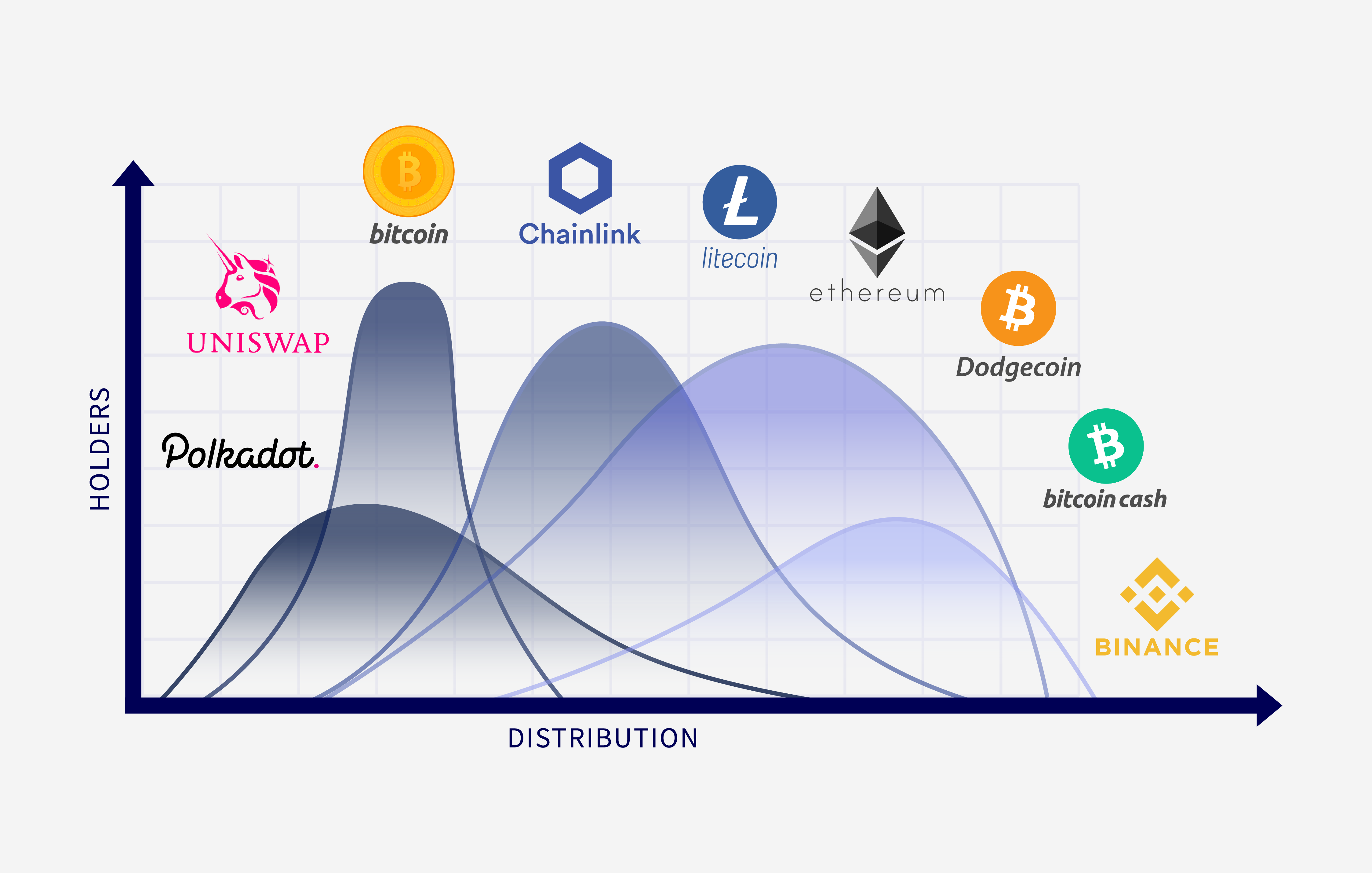 One of the many facets of cryptocurrencies is it’s transparency. Unlike conventional methods of fiat transactions, there exists a public ledger which is essentially a record-keeping system for all valid historic transactions. For each transaction there must be a sender and a receiver. In order to transact, both the sender and receiver must possess digital wallets that hold the cryptocurrency balances. While it is near impossible to steal or change these balances from the outside, we are able to see the precise balances in an anonymous manner. We’ve had a nosy peek at the top 1,000 wallets for the most popular cryptocurrencies with the goal to compare, comprehend and visualise their distributions. Before diving into the findings, let us first establish a few assumptions: ​

1. Each wallet is owned by a unique person

We know this is not the case as a person can own multiple wallets and distribute coins amongst them. This is especially true for those coin holders in the top 1,000 holders as it is safer to distribute coins using multiple addresses in case the private keys get compromised or lost. However it is also very difficult to identify unique coin holders, with a reasonable accuracy as some complex transactional analysis would need to be achieved.

2. All wallets are active with the holder in possession of the private keys

According to chain analysis, an estimated 20% of Bitcoins are now inaccessible by their owners due to lost or forgotten private keys. Back in 2008 when Bitcoin was worth a few dollars, owners could quite easily accumulate hundreds of coins very cheaply. Of course the small price paid meant that wallet holders didn’t care too much about securely storing their private keys in the manner we see today.

Effect on distribution analysis: The actual distribution is likely to be more concentrated amongst those wallet holders that actually have their private keys.

3. Exchange wallets are treated as a unique person.

Exchanges such as Binance and Coinbase hold large amounts of coins on platform and in cold wallets. While we know that these cold wallets are held by organisations and not individuals, for the purpose of this exercise, we still treat them as unique individuals. In fact, this is a valid assumption as whether the holder is an organisation or individual makes no difference, what matters is that it is a singular entity. This assumption will have no effect on the distribution analysis.

Ranking (Most to Least Distributed) 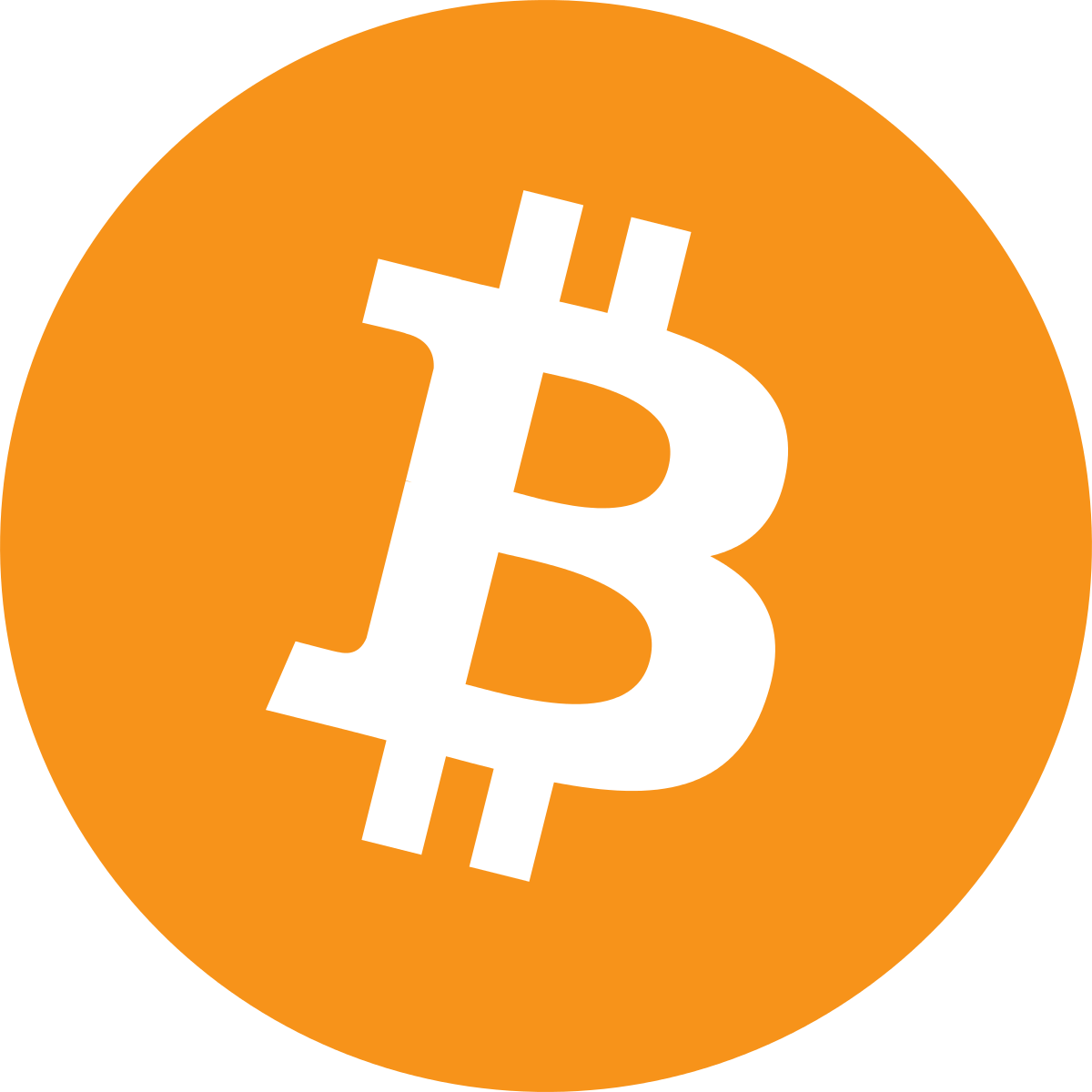 Supply
7 TPS
Age
12 Years
It’s no surprise that the oldest  and first cryptocurrency is by far the most well distributed cryptocurrency, arguably out of the entire crypto universe. Logic suggests that the longer a coin has been in existence, the more transactions would have occurred resulting in a higher probability of sparser distribution.

With over 300,000 Bitcoin transactions per day and over 70 million wallets created as of March 2021, it's safe to say that crypto elitists have the least ownership on the Godfather, Bitcoin.

Fun fact: If the Top 1,000 BTC holders represented Global GDP, the richest holder would be Switzerland. ​

According to data from Glassnode, Miners still hold a significant portion of Bitcoin supply, an estimated 9.7% or 1.8 million BTC. While we have assumed a dissimilarity between exchanges and individual users, it is worth noting that an estimated 12.7% is owned by exchanges. This could be partly due to the fact that todays traders and investors rely heavily on centralised exchanges such as Binance and Coinbase.

Supply
60 TPS
Age
3 Years
Pioneered by Roger Ver, the birth of Bitcoin Cash was the creation of a ‘fork’ from Bitcoin. The block size was increased from 1mb to 8mb with the primary goal of increasing the transactional throughput and therefore promote Bitcoin Cash as a means for currency. The distributions for Bitcoin and Bitcoin Cash are very similar. The reason for this likely due to the manner in which Bitcoin Cash was created. When the fork occurred, all Bitcoin holders received an equivalent amount of Bitcoin Cash in a 1 to 1 ratio. Theoretically, the distribution should be near identical. One reason why they are not identical could be due to the fact that lost wallet holders of Bitcoin did not ready their wallets for the bitcoin cash fork by moving to an exchange or wallet that supported the fork.

Fun Fact: If the richest bitcoin cash holder were a country, they would be France in terms of their GDP.​

Supply
56 TPS
Age
10 Years
On Number 3 on the list, we are the younger brother of Bitcoin, Litecoin. Created by Charlie Lee, Litecoin has 4 times the number of Bitcoin Coins, making it less rate. If Bitcoin is considered to be ‘digital gold’, then Litecoin is certainly ‘digital silver’. It should be mentioned that the distribution of Litecoin is very similar to that of Bitcoin Cash with the top 10 holders. From holders 10 to 1,000 Litecoin has a 10% higher coin holdings than Bitcoin Cash.

Supply
20 TPS
Age
6 Years
Ethereum, ranked number 2 in terms of its market cap, comes in at number 4 on our list in terms of its distribution. While still a cryptocurrency, Ethereum offers a different proposition to Bitcoin. What Google is to websites, Ethereum is to aspiring cryptocurrency founders. A completely open-source platform that allows anyone to create third-party decentralised applications to be built on top of the Ethereum network as a means to validate transactions. Vitalik Buterin is the major driver behind Ethereum and currently owns around 352,000 ETH which represents about 0.3% of the circulating supply available today. While Ethereum has a greater percentage distribution than Litecoin over the 1,000 holders, there exists a greater concentration of coins amongst the elite rich which are the top 10 holders.

Supply
130 TPS
Age
4 Years
Built by the CTO of Ethereum, Dr Gavid Wood built Polkadot with a description of Web 3.0. One of the major aims of the project is to enable custom side-chains with public blockchains. In addition to this, the project is planning for the future and trying to find ways for increasing the transaction capacity of public blockchains through a process known as sharding. Given it’s relatively recent creation. Polkadot is actually rather well distributed.

Supply
20 TPS
Age
3 Years
Uniswap is the newest creation on our list with it’s token. It is the largest decentralized exchange and fourth largest cryptocurrency exchange. Built on top of the Ethereum blockchain, it currently accounts for 30% of all transactions on the Ethereum network. Given the fact that is an exchange, the wallet holders are likely to be inaccurate and assumption number 1 would fall down heavily for this people’s project

Supply
33 TPS
Age
8 Years
Uniswap is the newest creation on our list with it’s token. It is the largest decentralized exchange and fourth largest cryptocurrency exchange. Built on top of the Ethereum blockchain, it currently accounts for 30% of all transactions on the Ethereum network. Given the fact that is an exchange, the wallet holders are likely to be inaccurate and assumption number 1 would fall down heavily for this people’s project

Supply
20 TPS
Age
4 Years
The second project on our list to be built on top of the Ethereum blockchain. Described as a tokenized oracle network, it’s purpose is to provide price and events data using a blockchain agnostic protocol. Ranking second from last, the richest holder of ChainLink, which is the founders themselves own a whopping 35% of the supply.

Supply
Variable TPS
N/A
Age
4 Years
The native coin for Binance is in hot demand right now. It’s primary use case is to reduce trading fees. For each trade, investors and traders alike save up to 50%, if they own some Binance coin as use their BNB as a means to pay for the transaction fees. According to Binance, other use cases include using BNB as a currency for in-store payments. When Binance initially launched the token was built using ERC-20 standards on the Ethereum blockchain however they have since extended the blockchain to their own native Binance Smart Chain, BEP-20. This has had a considerable impact on our analysis, according to both etherscan and blockchair, the circulating supply on the ERC-20 chain is 16,579,517 BNB. There is a total circulating supply of 154,532,785. We can only assume that the difference in these two figures is the amount held on the BEP-20 blockchain for which we do not currently have comprehensive data on. As such, the distribution you see here is only confined to the ERC-20 chain which represents about 10% of the total supply. According to the ICO whitepaper, 40% of the tokens were allocated to the founders. Given the centralised nature of Binance, it’s no surprise that the distribution is also centralised. We must say that Binance has served the crypto community and acted as a trustworthy exchange for the people.
About Us
Card Payment Guru
42 Lytton Road, London
EN5 5BY, UK.
Company No: 12822756
Quick Links
AboutBlogFAQPrivacy PolicyHome
Contact Us
Sales: 0800 009 6457
info@cardpaymentguru.co.uk
Opening Hours:
7am-11pm Mon-Fri
9am-5pm Sat-Sun
Follow Us